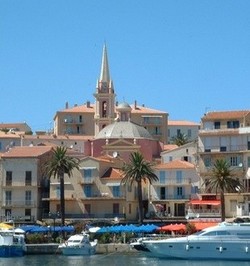 Corsica has superb beaches, lush countryside and stunning mountain scenery, yet is relatively unexplored as a holiday destination. It combines the best of French culture and lifestyle with that of its close neighbor Italy, resulting in a unique fusion which is defiantly Corsican. The island has resisted mass development, and both the coastline and the interior of the island remain refreshingly unspoiled.

Often referred to as ‘the garden of Corsica’, the Balagne, in the northwest of the island, is a diverse region with plenty of attractions. The highest peak, Monte Cinto, remains snowcapped for much of the year, while the fertile plains are lined with vines, olive and citrus trees. Up in the mountains, yet not far from the sea, there are several villages well worth visiting, where you really feel as if you have stepped back in time.  On the coast, the picturesque town of Calvi has a stunning 6 km sandy beach, chic waterfront and yacht marina, and an impressive genoese citadel, birthplace of Christopher Columbus.

As well as plenty of restaurants and bars, Calvi also offers a wide variety of watersports and land-based activities, making it a great base for a holiday. A small train runs along the coast of the Balagne between Calvi and the market town of Ile Rousse, where the central ‘Place Paoli’ is a great spot for people-watching while having a relaxing drink in one of the cafes. There are lots of beaches along the coast, some are small turquoise coves while others, such as in the village of Algajola, are long expanses of fine white sand.