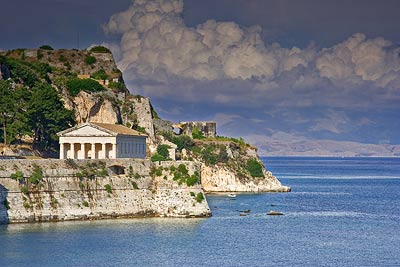 Greece, on the Balkan peninsula, shares borders in the north with Albania, the Former Yugoslav Republic, Bulgaria, and Turkey. The coastline stretches over 8,500 miles and is washed by the Ionian Sea to the west, and the Aegean Sea to the east. The mainland peninsula is surrounded by some 3,000 islands, less than 200 of which are inhabited, and perfect for those seeking peace and tranquility.

Most of the country enjoys a so-called Mediterranean climate. Summers are hot and dry with a 7-month period of near-constant sunshine generally, from April until November. The remainder of the year is characterized by a relatively cold, rainy period which starts some time in November and lasts until late March or early April. This has encouraged a richness of flora, with over 6,000 species, many of which occur nowhere else, and some 100 varieties of orchid. The most pleasant weather occurs in May-June, and September-October when the annual meltémi winds from the north cool the country.

Greece has an ancient culture that has had a significant influence on the arts, language, philosophy, politics, and sports of western society. First-timers are fascinated to discover a country with such diversity. Architecture varies greatly from one region to the next depending on the local history: visitors will find classical ruins and temples here, Ottoman-influenced churches and castles there; the famous whitewashed homes and charming blue-domed churches only characterize the region of the Cycladic islands, whilst pastel-colored baroque homes and churches abound on the island of Corfu. The nation’s terrain is just as varied as its architectural heritage: idyllic beaches, towering mountain ranges, wine-producing valleys, vast stretches of olive orchards in the south, and lush forests in the north.

Greece ranks among the world’s 20 most popular tourist destinations. We’re drawn to the country’s beaches and reliable sunny summer weather, its historical sites, natural, rugged beauty, laid-back nightlife, and to the warmth of its people. No surprise that many return here again and again…