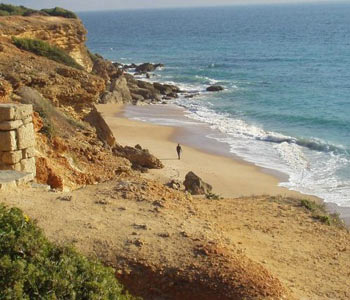 The Costa de la Luz, on the western side of Andalucia, is a world apart from the more commercialized Spanish Costas, and the area has long been much-loved by Spanish holiday makers. Many of the seaside towns of the Luz therefore have a genuine Spanish feel because they did not evolve geared around foreign tourism.

The Costa del Sol is situated on the southern coastal region of Andalucia, and true to the Spanish name, boasts over 300 days of guaranteed sunshine a year.  The region’s sunny climate is due its geographical position and the range of hills, set back but parallel to the coast, which protects this area from bad weather.

The eastern Costa del Sol retains much of its traditional Spanish charm, and is a popular destination for Spanish families and holidaymakers who wish to relax away from the larger resorts.

The coastline stretching east from Malaga offers a wide range of beaches, from secluded coves and naturist beaches, to the larger, more commercial variety with craft stalls and pavement artistes.

No holiday in the Costa del Sol should exclude a visit to Axarquia, the wedge-shaped region to the east of Malaga and stretching inland to the rugged Tejeda mountains. From the bustling cosmopolitan coastal resorts, to the quietest of rural retreats inland, this is a beautiful part of Spain, blessed again by the same superb climate, and rarely dropping below 10C, even in the depths of winter. The beaches are open all year round, and sunbathing is possible most months. In the mountains you will find rare birds of prey and many hiking opportunities. New highways have made visiting cities such as Granada, Cordoba and Malaga feasible.

Costa Blanca refers to over 200 kilometers of coastline belonging to the Province of Alicante. It has a well-developed tourism industry and is a popular destination for British tourists. It extends from the towns of Denia in the north, beyond which lies the Costa de Valencia, to Torrevieja in the south, beyond which lies the Costa Calida. It includes the major tourist destinations of Benidorm and Alicante. The Costa Blanca is an ideal location for a summer or winter sun holiday with an average of 320 days sunshine each year.