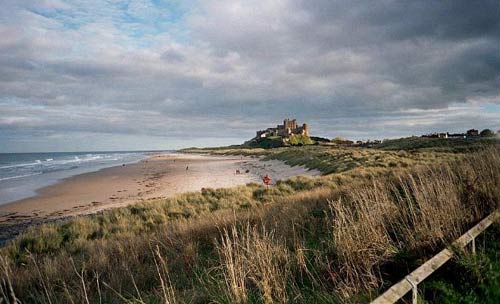 Northumberland – a county of extremes, from the rugged wilderness of the National Park and Heritage Coastline to the nearby vibrant city of Newcastle upon Tyne.

The northernmost county in England, Northumberland is deeply steeped in history, as the Border Wars took place in 14th – 16th Century, with Reivers making raids either side of the changing Scottish/English border. Awe-inspiring Hadrian’s Wall also bears testament to the Romans’ dominance of the area. Thankfully, things are a little more tranquil these days and even in summer, visitors can stroll undisturbed on the quiet, sweeping sandy beaches.

There are many majestic and imposing castles such as Bamburgh, Dunstanburgh, Chillingham – which often appears on T.V shows as “the most haunted castle” in England – and Alnwick, which is likely to be known to children as “Hogwarts” from the Harry Potter films, as the courtyard and great chamber were used extensively during filming.

Belford Village is ideally placed for touring around the border area; it is a former historic coaching stop on the old A1 trunk road from London to Edinburgh. The village was bypassed in the 80’s, leaving it free of heavy traffic but with easy links to the main A1 truck road. With a population of around 1000, Belford is small enough to maintain a friendly community feeling, yet has 4 pubs, a community club, a golf club and a selection of specialist shops.

Being close to the heritage coastline and Cheviot Hills, the area is perfect for hiking, bird watching, fishing and cycling, or just relaxing and sightseeing. There are many golfing opportunities nearby, with some stunning coastal courses and a golf club and driving range within Belford Village.

Nearby “essential sights ” are: The Holy Island of Lindisfarne, which is the cradle of Christianity in Britain, Alnwick Garden with one of the world’s largest treehouses, Cragside House and estate (the first house to be lit by hydro-electricity), and also the fishing village of Craster, famed for its delicious kippers.

Northumberland is known as “The Secret Kingdom”: visitors to the area are sure to find their own favorite hidden secrets in this area of dramatic contrasts.